A Memoir from a First-Time Author

Image 1: Cover Details
A dandelion breaking through asphalt symbolizes the author’s life story. To bring focus to the title, the cover design brings the dandelion to the forefront with background distractions eliminated. Subtle rays keeps the eyes riveted on the center attraction.

Image 2: Created Flourish to Set Apart Particular Passages
While the majority of the book is the author’s memoir, a couple of pages needed to be set apart as a stand-alone piece of writing. This flourish at the top of the page was designed with a heart in the center to reflect the Voice of Love speaking in the prose.

Image 3: Illustration Cleanup
The author’s daughter provided several illustrations for the book. She took photos of the artwork which then required adjustments to eliminate the wrinkles of the paper and not fully erased pencil marks.

Contemporary/Literary Cover Design
It is important to design the cover within the genre. The purpose of the cover is to make a promise to the reader of what they can expect from your story. Your cover must align to the genre-specific expectations. To that end, the cover doesn’t have to be a scene from the story, but it must be abundantly clear what the book will deliver. Beyond Farewell Beach touches on several successful design strategies for contemporary fiction: beach scene, lots of space, some element of mystery with the setting and colour selection.

Image 2: Mystery/Thriller Cover Design
Covers typically use sans serif, sharp and edgy fonts, with the title being the focus. Images can be high contrast when emphasizing the tension, or murky atmosphere and deep shadows to emphasize the mysterious.

Image 1 and 2: Choosing Fonts
On the first book done for this author, she sent a suggested cover image and title in place. She looked for something that would set her books apart from the myriad of self-published books and mistakenly chose a font designed for horror applications with blood dripping. Since she had three books that she was moving from a vanity press to independently published, we discussed the personality of fonts. They carry meaning based on their design. For example, there is a reason the bold, straight letters of the stop sign would not have the same impact if the font was a curvy wedding invitation font. While this is an extreme example, all fonts have a personality and are carefully chosen to support the title, imagery, and genre of the book.

Image 3: Consistent Formatting
For authors that write in the same genre, the styling within the interior needs to be the same among the various books as this is part of the branding. Consistency, while subtle, is essential to giving the reader a coherent look and feel experience.

Cover and Branding for a Series

Image 1: Series Branding
These are the first two books in a series. Colours, imagery, fonts and design were chosen to align to the genre. The purpose of the cover is to inform the reader on what to expect from the story – in this case, a mystery thriller series.

Image 2: Freebie eBook Cover
The author wanted to employ a unique promotional strategy. The first seven chapters of the first book in the series available as an ebook freebie to allow readers to sample the author and story. While the cover needed to align with the full book, it needed text to indicate that this was only a portion of the story. 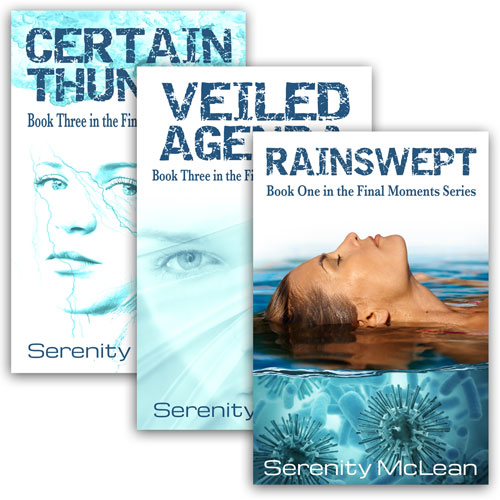 Image 1: Boxed Set
When selling several books together as a boxed set, the thumbnail image needs to show the boxed set, not all the separate books. The digital box and books need a unifying design, which often includes the book number on the spine along with a design that spreads across the spines as one continuous image. If one of the books is pulled out and standing in front, the cover will have the boxed set design on the cover rather than the cover of the book as sold alone.

Image 2: Print Set
If bundling books of a series into a single printed book, Amazon will not allow the words Boxed Set for the print version as it implies the buyer will receive separate books in a beautifully designed case. Since the bundle is assembled into a single print version, the display and cover needs to reflect what is really being purchased.

Image 3: Original Book Covers (when sold separately)
Each book in the series is branded to have a similar look and feel. This is retained in the boxed set cover and design by using the same elements.

Image 1: Working With an Image From a Go Pro
The author sees deeper meaning in everyday sights and events. Another Perspective focuses on this new perspective. The image was selected from the author’s skydiving experience. By turning the author upside down, enhancing the perspective of the landscape, and aligning the title to the curvature of the earth, the eye-catching design supports the title.

Image 2: Selecting Images
The author exclusively uses her own photos in all her books. They mark the division between sections. The challenge is to find ones with enough resolution for printing, and ones with imagery that will hold up even in grayscale. For example, she wanted to use one of a rubber duck race. It was taken from a distance, resulting in little yellow dots in a small section of the photo. Once this converted to a black and white image for the print book, the little dots were meaningless.
Once the client finds images that meet the threshold requirements, they often require some cleanup and adjustment. The distracting background of the Christmas cactus image was blurred and darkened to bring the flower into focus.

Image 3: Sectional Divider
The author exclusively uses her own photos in all her books. They mark the division between sections. In support of the idea that these pictures are quick snaps while out and about, each photo was framed in a white border and scattered on the page. The photo related to the section appears at the top of the pile.

Within Genre, Yet Unique and Memorable Covers

Image 1 and 2: Kingdom Within Cover
Given free license for cover design, the challenge was to represent the spiritual life and light from within. This image started with a photo of a decorative lantern (see the second image).

Image 3 and 4: Language of Dreams and Visions Cover Cover
The challenge with this cover was to represent the ethereal and expansive nature of dreams. The most difficult part of the assembly was creating the tree reflection on the surface of rippled water.

Image 5 and 6: Divine Focus Cover
The only direction on this cover was to include something spiral from nature as the content of the book deals with going deeper spiritually. The image was color corrected and repeated in the background to add a sense of movement.

Image 1: Cover Design
This first-time author was well into her 80s when she published her memoir. She had never shopped online or knew much about Amazon. With coaching and support, she set up her account, acquired the ISBNs and now manages her own book and sales online. She provided a couple of images to choose from for the cover. She lives in the interior of British Columbia and wanted something that reflected her story and her location.

Image 2: Cover Elements
Several enhancements were done to the image to give it depth and a sense of the unknown ahead. Also, the shape of the trees generated a subtle texture to the no-image areas of the cover. 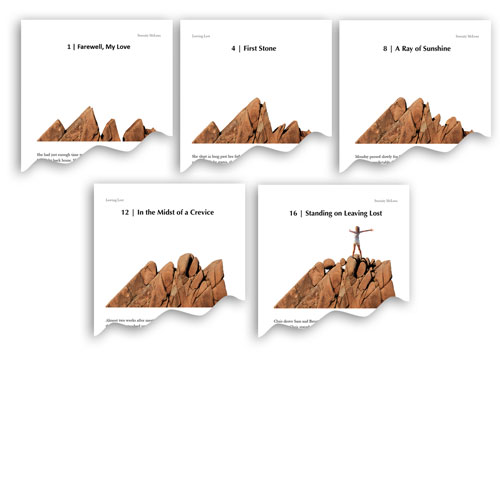 Image 1: Chapter Glyph
Glyphs give your book a professional look. They are ornamentals, mostly illustrations used to mark parts of a book – sections, chapters, jump in time or location, journal entries, etc.

Image 1 and 2: Fiction, Weeping Dune
A variety of glyphs used in a fictional story based in South Carolina.

Image 3: Fiction, The Flawless Life
A variety of glyphs used in a fictional story based in Hawaii. The sea turtle was a strong symbol in the story.

Image 4: Fiction, Leaving Lost
A progressive series of chapter glyphs. A stone is added to the rock face with each chapter. The final glyph shows a triumphant woman on top. The stones represent the woman’s progression in faith.

Image 5, 6, and 7: Non-Fiction, Divine Focus, Set of Three Books
Upon seeing another book published by Dome Tree that used progressive chapter glyphs, she drew the illustrations for the front of each book as well as the progressive drawings – clam and pearls, fern growing, and snail moving across the page.

Image 8: Non-Fiction, The Voice of Love
The author uses a dandelion breaking through asphalt as a symbol for her life and had her daughter draw this glyph.

Image 1: Cover Details
The author did not have a strong vision for the cover. He thought something misty or foggy. I asked a few more questions then sent him a draft of this cover. He was pleasantly surprised as the proposed design exceeded his expectations.

Image 2: Photo Prep
This photo was taken by the author’s wife inside the house. It was summer and exposure to the sun caused his face to appear too red. I made a few minor adjustments and replaced the house walls with a neutral background.

Image 3: Collateral Work
The author expects to write more books and wanted to build on a branded platform. Along with a 3D digital version of his book for promotional purposes, I created this Facebook header. Also designed business card to hand out, directing people to his author page.